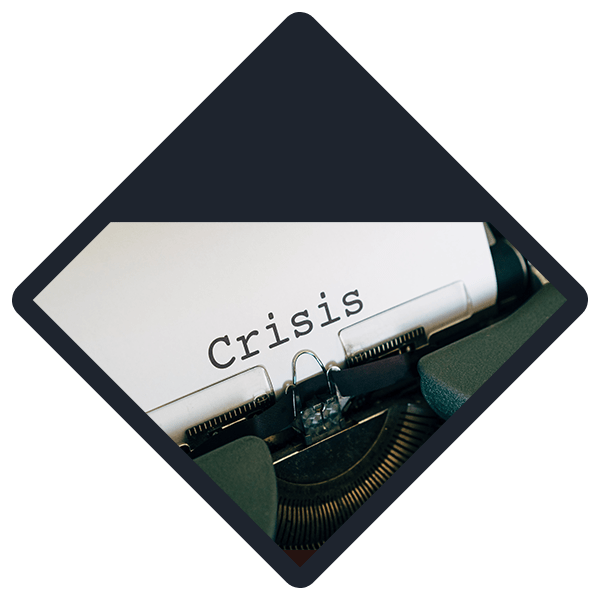 In this article, I invite you to join me on a journey through language and the different perspectives it can reveal. The terms we use to describe our experience can tell a lot about our psychology. My assumption is that there is a strong subconscious link between the way words evolve and our view of the world. We shape words by our view of the World, and our view of the World is shaped by the words we use to describe it. Different cultures enriched us with different perspectives through the evolution of their language.

The Initial Connotation – A negative One

As a starting point let’s look at the current dictionary definition of the word ‘crisis’ in English:

2.      A sudden change in the course of a disease, indicating either recovery or death.

3.      A crucial or decisive point or situation; a turning point.

4.      (psychology) A traumatic or stressful change in a person’s life

5.      (drama) A point in a drama at which a conflict reaches a peak before being resolved.

I believe the first general and obvious meaning of Crisis in the collective consciousness of English speakers is: A time of intense difficulty, instability, uncertainty or danger. Etymologically* the noun crisis is the Latinized form of Greek KRISIS, meaning decision, or judgment; from the ancient Greek verb ‘krinein’ (from Krey) meaning in essence ‘to separate, decide, judge, distinguish, sort’. It is clear how the words critical, critic and criteria are all descending from the same Greek root.

The classical physicians Hippocrates and Galen used KRISIS to describe a turning/decision point in a disease. At such a moment, the patient could start getting better or keep worsening, it’s the point of life or death: a critical moment.  The term only later (17th century) became associated with personal, social, and economical depression.

Let’s look at the word ‘decision’ for a moment. The words Homicide, Suicide and Decide, all have ‘cide’ in them, ‘cide’ in Latin means ‘to slay, to strike, to kill’. The word ‘homicide’ in Latin literally means ‘man-slayer’, ‘decide’ in Latin literally means to ‘kill’, ‘slay’, or ‘cut’ other options or alternatives. The German term for “mid-life crisis” is Torschlusspanik, literally “shut-door-panic,” fear of being on the wrong side of life. These interpretations are very dramatic and evoke negative associations that can subconsciously create a lot of stress and pressure.

Let’s look at another pre-classical language. In Hebrew, my mother tongue, and an ancient Semitic language, the word for crisis, MASHBER (משבר) like many other words is an auto-antonym: it has multiple meanings some of which contrast with each other. All meanings come from root SHEVER (שבר), which initially and literally just meant a crack, a physical point of breakage. Only later (early 20th century) with the revival of the Hebrew language it became equivalent to today’s crisis, commonly describing a dangerous low point, a point where things start to break down psychologically, socially, or economically.

As seen above, in Greek, Latin, German, English, and modern Hebrew the term Crisis mostly has a negative connotation, but there is more to discover. To further explore that, let me share with you three meanings of MASHBER/SHEVER in biblical Hebrew, which are enriching and can potentially shift our relationship with any crisis from a negative to a neutral one.

Labor – A Moment and Place Of Birth

Firstly the word Mashber can describe a ‘birth throne’, the type of chair on which a woman would sit to give birth, and Malbim described it as the physiological point in birth where the fetus is coming out of the womb into the birthing canal, the point of internal birth.

This carries a beautiful hidden message in it, that by nature, a crisis is a process of giving birth to something new, yet to be seen, yet to be revealed. When the child is starting to come out of the uterus into the birthing canal, it is invisible to the eye, at this point we only see the pain. The ‘fruit’ (baby) is invisible, but soon to be revealed. This is still an incomplete view though.

Pregnancy is a very gradual process of growth over many months and the word Mashber describes the tipping point, the very transition when nature accelerates the process of pregnancy to its end and the woman goes into labor. Labor is a ‘crisis’ for a woman as her body goes through extreme changes and dangerous circumstances and at the same time, it is a rite of passage, whereby the fetus turns into a baby, the woman turns into a mother; it is the moment of the birth of new life, a new stage with new possibilities.

A Big Wave – A Natural Accelerator and Equilibrator

MISHBAR (מִשְׁבָּר from the root SHEVER) can also mean a big ocean wave that breaks into the rocks, a force of nature that ‘washes’ and ‘cleans’ the old and creates space for the new.

Crisis is the agent of change, it is an accelerator, an equilibrator, an integral and inevitable part of nature, it’s not a question of ‘if’ it is a question of ‘when’. It is humbling for us to understand that crisis is an inevitable part of life. We can embrace it instead of wasting our energy resisting it or being surprised and shocked when it shows up in our life.

A big crisis, like the current global circumstance, on average happens only once every 50-100 years. During these, time shrinks. Things that would usually take a decade to change and decay or change and develop, are now happening within a year or two. Since we are still in the throes of it, we cannot see the full picture at the moment, but we can already witness a potential deep shift in our relationship with working life, hygiene, travel, shopping, healthcare, and the accelerated ‘going digital’ of a big range of services. This ‘going digital’ movement would have happened one way or another, but because of the crisis, it’s happening a lot faster.

My grandmother who was born in Europe in 1909 used to tell me, “I lived in three very different worlds which didn’t look or feel the same: the world before WWI, the world after WWI and the world after WWII.” Each world war was a catalyst and an accelerator wiped out old beliefs and ways of doing things and created a very different world. Social, cultural, and technological developments that could take a few decades, happened in a glimpse. This acceleration brings both challenges and opportunities and how we deal with it, as a society and as individuals, is going to reflect the level of awareness that we have.

We all experienced crises in our personal life, that at one moment felt devastating, but with time came to be a source of great blessings. I have experienced this with my marriage falling apart in my late 20’s. A huge personal crisis, an identity crisis that broke me into pieces but at the same time gave me the opportunity to reassemble my life in a way that is more authentic to my true self. Back then, it looked like an unwanted crisis, from today’s standpoint I can appreciate it was a moment of birth.

Resolution – To Give Meaning and Solution to The Breakdown

The third meaning or word from the same root SHEVER is MESHABER(מְשַׁבֵּר) or MASHBIR(מַשְׁבִּיר). These words have two, almost contrasting meanings. It means both to break something strongly into pieces and to hope, to yearn, to solve, to feed, to interpret, and to give meaning. This is beautiful because it is subconsciously instilling in us trust that in the depth of the crisis, there are hidden blessings which time will reveal. It is also empowering because it is throwing the ball back to us to find meaning, it is inviting us to link it with glory rather than shame. There are no coincidences, if it came, it was for a reason, it is our job to find the most empowering meaning in it.

History provided countless examples of time and time again for defining critical moments. The American Civil War was the birth of the American nation as we know it and its lasting effects include banning slavery and firmly redefining the United States. The Americans gave meaning to the crisis. The crisis created an opportunity for a new meaning, for a more complete and empowering narrative.

We have also seen this with the recent anti-racism protests, following the shocking murder of George Floyd. A spontaneous meaning was associated with the event, it meant something, his death wasn’t for nothing. His death by police violence started a form of American national crisis, which gave rise to a social awareness on the issue of racism and created an opportunity for a more just system and society in the whole world.

Conclusion – From Negative to Neutral

To me, discovering these meanings made a huge difference in the way I approach life, from the obvious negative meaning of difficulty, danger, and critical decision to a neutral one where crisis is a moment of personal responsibility, opportunity, and choice. I hope it inspires you to review previous crises in your life and integrate them into a more enriching story. I invite you to take a moment, look back at a major crisis you have experienced in your life, and try to identify what it actually gave birth to…

* Etymology is the study of the origin of words and the way in which their meanings have changed throughout history.

This article is part of a series of articles on the topic of crisis. A few weeks ago I published an article, on how the 7 behavioural responses to a crisis, like a mirror, reflect the different levels of psychological awareness in us. In the next article in this series, I will detail the practice which helps us face crises powerfully and effectively.

Written by Gal Stiglitz, Founder & Creator of iDiscover 360 a school of thought for human development and life design in the modern era.